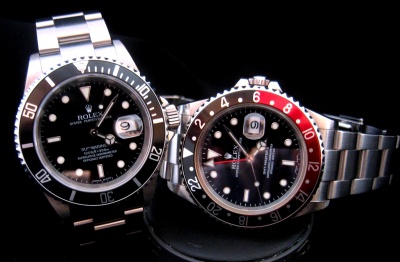 With the Anniversary editions of the GMTII-C and the Ceramic Rolex Submariner, there has been much discussion on the older, now “classic” GMTII that is still available if one scours the net or ask AD's to check in their safes. This GMT II D serial I owned for a few years after owning a DateJust, NoDate Submariner, and Turn-O-Graph. I obtained the Submariner (Z series) after trading my SeaDweller because it was too heavy. The Submariner and the GMT are two similar watches using the same case, crystal, chapter ring, but each of them wear differently because of a few distinguishing factors that I describe below.

The Submariner was first shown in 1953 and was released to the public at Basal in 1954 as model number 6204. The first Submariner had no date mechanism, the bezel was bi-directional, not unidirectional as it is now, and the hour hand lacked the Mercedes symbol that is now expected on Rolex sport watches. The depth limit was 600 feet and the watch case had no crown guards.

The early 1950’s were the watershed years for Rolex sport watches. During this time, Everest was being conquered, transcontinental flights were available to the masses, and underwater diving records were broken. In 1954, Rolex unveiled three breeds of sport watches. The Submariner for underwater exploration, the Explorer for conquering mountains, and the Turn-o-Graph for jet-setting businessmen. Later, the Turn-o-Graph would be revised into the GMT Master, then revised in the early 1980's as the GMTII with the addition of a quickset date and independently moving hour hand to monitor three time zones.

Both the traditional Submariner and the GMT II share the same hands, case, and crystal. The primary difference between the watches, other than the obvious differences in the bezel insert, and the 24 hour hand on the GMT, are the clasp, the caseback, bezel, crown, and the half-link/full link. 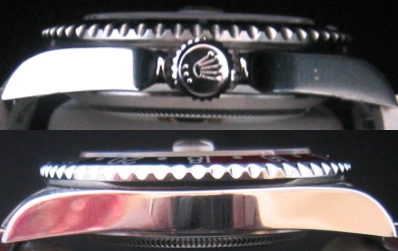 The Rolex parts book does not shed any light on the crystal height difference; all the parts appear to be the same. It is possible that the bezel ring rides higher on the GMT because it requires a little more play to rotate bi-directional rather than un-directional on the Submariner. 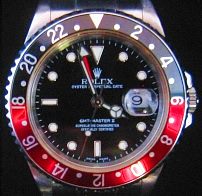 With the crystal appearing a little higher, when comparing the two watches side by side, the date view appears a little bigger on the submariner. If the Sub crystal is in fact riding higher, the date would magnify larger than the GMT. The other theory is that the watch face is farther into the case, increasing the distance between the date, and the cyclops on the lens and making the date appear larger. 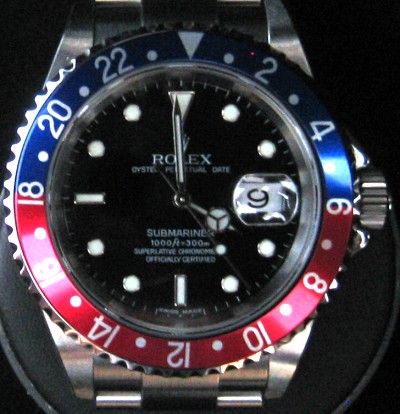 The bezel ring on the two watches are subtly different. The bezel on the GMT rotates bi-directionally, whereas the Submariner only rotates counter-clockwise. Although the insert appears to be interchangeable, the bezel is slightly thicker on the Submariner giving it a slightly more robust appearance. The picture on the right shows my extra Red-Blue GMT Bezel insert sitting on top of the Submariner bezel ring.

When looking at both watches side-by-side, the slight difference in the bezel thickness, combined with the subtle difference in how the number appears in the date window give the GMT a slightly wider, shallower look. The Sub, by comparison, the face appears deeper in the case and the dial insert appears slightly smaller/narrower. In actuality, the bezel insert is the same dimensions as the GMT, but the smaller look is given by the slightly thicker bezel ring.

The Caseback and Height

The next time you are at an AD, examine the traditional GMT II or Explorer II (if they are available). Place both your thumbs on the caseback and try to flex it. At first, you will not notice any flex, but after repeating the same test on the Sub, there is a discernable difference.

The added thickness of the caseback makes the Submariner ride a little higher and with a little more watch-flop. The GMT fits closer to the wrist and seems to slip under a shirt cuff without getting hung-up.

As you can see in the old advertisement on the left, caseback thickness makes a difference.

According to Caroyln at The Rolex Forums, the caseback is almost twice as thick on a Submariner than it is on a GMT. Using calipers that have a .02mm in variance, she found the following:

Caseback thickness really does make a difference in the depth rating.

The bracelet on both watches are the same with two noticeable differences.

For smaller wristed wearers, the ½ link helps bring the clasp to the center of the wrist. I believe that if the SD had 4 ½ links rather than 5 full links, like the GMT, I would have kept the SD. For small wristed folks (eg. 6 ½” diameter), the clasp hinge does not fully center on the underside of the wrist; part of the hinge hangs over the side.

For desktop divers and aviators, the increased clasp thickness is noticeable when doing desk work (keyboard, writing). The GMT clasp, being similar in dimensions to the DateJust from which the GMT originated, excels in desktop duties.

The clasp hinge is the same on both watches, but the clasp cover is longer on the Submariner to accommodate for the divers extension. The divers extension expands very similarly as the SD. Some people have written that the clasp is longer on the Submariner. In actuality, it's only the cover that is longer as the hinge is the same length. More information is posted here regarding the differences in Rolex GMT and Submariner clasps.

Perhaps the biggest difference in how the watches wear, especially for small wristed wearers, is the ½ link on the 6:00 side of the Submariner. For small wristed wearers, the half-link on the 6:00 o’clock side brings the clasp hinge closer to the center of the wrist. The ½ link combined with the increased height of the caseback make for a perfect fit for a 6.5” wrist. The GMT always sits on the outside of the wrist because all the links are removed on the 6:00 o’clock side and the outside band links somewhat cantilever off the clasp hinge thereby pulling the watch head to the outside of the wrist. This is not a major point, but noticeable when switching between a Sub and a GMT. For 6.5” wearers, the difference the ½ link might make the difference for prospective wearers deciding between a GMT and a Sub.

In all, I like both watches, but eventually I flipped the Sub to clear the way for the GMT-C (116710). Since writing this review, I own both a 116710 and a 16710 w/3186 movment. I appreciated how the Sub wears, but I favor the lower height of the GMT and the 24 hour hand for monitoring bicycle race start time in Europe. Nevertheless, the Sub is a great classic watch with a classic design that is recognized and copied everywhere.