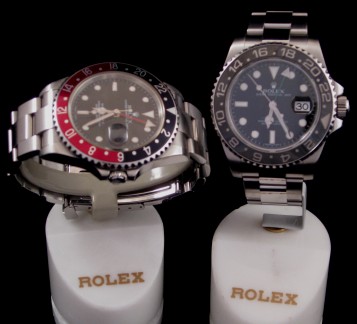 An all stainless updated Rolex GMT was worth the wait  as this watch hit made it accessible for many and the mark on many fronts. After wearing an all stainless DateJust, a Turn-O-Graph (TOG), GMTII (16710T), SeaDweller (16600), and Submariner, (16610) the GMT-C (116710) met and surpassed all my expectations. The GMT-C combines the updated bracelet that is seen on the TOG, the heaviness of the SeaDweller (SD), the maxi-dial of the Lunette Verde (LV) Sub and Yachtmaster 16622, the security of a Triplock crown from the SD and Sub, and the comfort of a traditional GMT. A Rolex .MP4 video of the watch is posted here. The additions of the Parachrom Blu hairspring, the updated clasp, the ceramic bearings under the bezel, and the ceramic Cerachrom insert puts this watch in the next rung of re-designed Rolexes that will be around for generations. The GMT has had a long evolution that is well documented here. 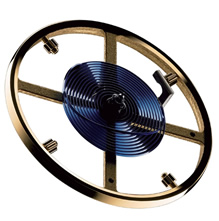 The movement has been reexamined and the Rolex GMT-C 116710 movement has redesigned elements that set it apart from the original 16710s. The movement inside the traditional 16710T ("T" for no-holes pierced case) movement is a time-tested 3185 movement that allows for moving the hour hand independently forward/backwards as the user travels through time zones. The 116710's 3186 movement includes the Rolex's proprietary Parachrom Blu hairspring, and according to James Dowling in a TimeZone post, the wheels of the drive train are closer together removing some of the gear play felt in the 16710 when the hour hand was being set. Anyone new to Rolex would not notice, but when compared side-by-side, there is a little more slop when setting the hands of the 16710 than there is with the 116710. Update:The 3186 movement and Parachrom Blu hairspring are installed in late Z and all M-series 16710's and M-series Explorer II's. More information is posted here. A video of the making of Parachrom Blu is posted here

All of the redesigns incorporated in the 116710 have made the watch heavier than the traditional GMT. My 116710 weighs in at 141g on my kitchen scale. The traditional GMT comes in at 116g. Both of my watches have two links removed so that they fit on a 6.5-6.75" wrist.

As a comparison, the chart posted here, lists the Submariner at 135g and the SeaDweller at 147 which is in the same range as the 116710. It appears that my kitchen scale might be weight light as the same chart shows the 16710 127g, ten grams heavier than what my scale indicated.

The height of the 116710 is reported as being 13mm, but many measure it as 12mm. The 13mm height is similar to a Submariner and 1mm taller than the 16710T. The extra millimeter is hardly noticeable; the weight difference is more noticeable than the height difference. 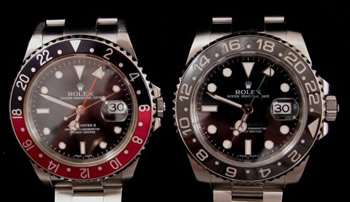 Differentiating the models is the anti-reflective coating under the cyclops of the 116710. The picture on the right attempts to show the difference between the two models' cyclops and how they reflect light. I have found the cyclops on the 116710 much easier to read and has less glare.

First time Rolex wearers would not notice the difference, but there is a noticeable difference when viewing the date between the 16710T and the 116710. Viewing the date is easier on the 116710 and one does not have to look at the cyclops straight-on as with other Rolex models.

The green 24 hour hand on the 116710 is also a noticeable difference from the red 24 hour hand on the older model. Any Rolex model with the Rolex Green signifies that the watch model is over 50 years old, such as the green bezeled LV Submariner, or green crystalled Milgauss. 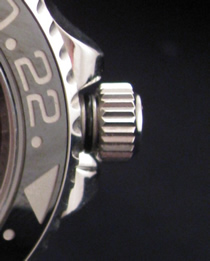 Even with the Triplock crown, the 116710 is still rated as being water-resistant to 100M and not 300M as with the Submariner. The design difference between the Sub and the 116710 is the caseback. Even though the 116710 has the same crown and heavier case as the Sub, the caseback is of similar thickness as the GMT-DateJust series. As in a picture shown here, the caseback flexes under pressure and thereby keeps the 116710 rating at 100M (although your mileage might vary…).

The 116710 bracelet uses solid links rather than hollow links as the traditional Rolex models. The updated bracelet fits similar to the new TOGs and DateJusts. The links on the 116710 are not as thick as the 16710T near the watch head. The difference is slightly noticeable to the eye, but not to the wear and feel of the watch.

Just like the newer TOGs and Datejusts, the redesigned bracelet has a built-in expansion link that appears to adjust the bracelet the same as moving the bracelet in the adjustment notches inside the clasp. The expansion link is a welcomed feature, especially when adjusting the bracelet is a little harder on the 116710 than the traditional Rolex clasps as there are no holes. I have used ballpoint pens, tooth picks, thumbtacks to make quick bracelet adjustments on the 16710. 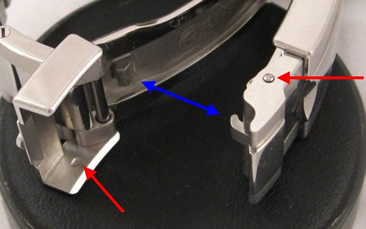 thoroughly redesigned and is a design marvel in itself. This new type of clasp is not used on any other Rolex, except the Yachtmaster II. The clasp is milled stainless and is similar in construction as the newer clasps used on the TOGs and DateJusts. Setting this clasp apart is the spring loaded hook inside the clasp. A spring keeps the clasp hook locked in place, and a springbar keeps the security cover locked in place. The security cover on the 116710 does not use compression to keep the buckle closed as in the 16710T, but rather it keeps the tab from moving backwards. The security cover moves freely when opening and closing with no friction on the side of the clasp cover, as with the 16710T. 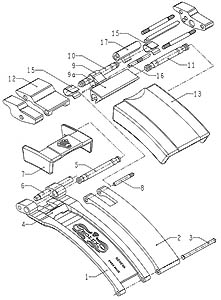 The clasp schematic from what Hannes found in the Rolex patent design illustrates how complex the new clasp is, but the schematic does not show the hook noted by the blue arrow in the photo above.

There is more insight on how this clasp functions in the Rolex US Patent document posted here (right click and save the .pdf to your desktop).

Inside the clasp are three notches used for micro-

The introduction of the Lunette

Verde (LV) Submariner and 50th Anniversary Submariner, as well as the YachtMaster 16622 showed a redesigned watch face with larger hands, and larger indices. This same type of dial and hands is on the 116710, but with a larger hour hand and hour markers than its maxi-dialed predecessors. The readability is improved, but there were never really any problems with the readability of the 16710T watch face. The maxi dial and hands do assist with the nighttime luminescence of the watch. These distinct qualities that are equally important and to decide between the two is hard. Like with all Rolexes, the hands and hour markers are made of white gold and inlaid with SuperLuminova. The mercedes hour hand is designed such that it can hold more SuperLuminova without the SuperLuminova cracking. My only criticism of reading the watchface at night is that it is hard to see the 24 hour hand. The arrow is the same size as an hour dot/indicator which makes the 24 hour triangle hard to discern at night. In both of this image of both watch faces, the 24-hour triangle disappears (hint: it's at 2:00 o'clock). 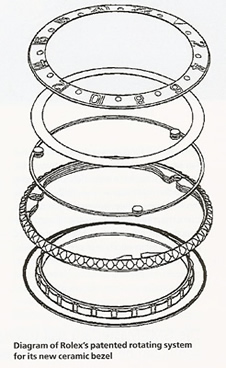 One of the distinguishing features of the GMT is the 24 hour bezel used to measure various timezones. The bezel of the 16710 uses a click-spring to hold the bezel in place. Earlier GMTs (GMT Master) had no clickspring which allowed the bezel to slide in either direction. The 16710 (GMT Master II) uses a clickspring that prevented the bezel for being knocked from its setting, but the older spring allowed for the bezel to move easier counter clockwise than rotating clockwise.

The bezel on the 116710 is thoroughly redesigned. The bezel rotates on three ceramic ball bearings similar to the new TOG’s that rotate on steel bearings. Rolex has moved past the design concept of the bezel sliding by compression on a small washer. The 116710 bezel clicks in one-hours jumps and not in minutes as the 16710T. Each rotation the user feels a noticeable click of the ceramic bearing holding the bezel in its setting (Schematic from Watchtime Magazine, Rolex Special Edition). In Rolex's 2008 Basel media release on the DeepSea model, the ceramic bezels are referred to as CERACHROM. CERACHROM appears very similar to the ceramic bezel used on the 116710, but the numbers are flush on the bezel and not indented like they are on this model and the Ya.phpaster II bezel. According to James Dowling, either platinum (silver color) or gold (all gold and two-tone models) is used to signify the numbers on the bezel. The numbers are held onto the bezel using Physical Vapour Deposition (PVD) which allows the metals to be placed in the exact position in the exact thickness. Gold is used for the bezel numbers on the 18k and 2 tone ones because it matches the gold on the bezel and platinum is used for the steel one because steel cannot be deposited, but platinum works well.

There is more insight on how 116710 ceramic bezel works on the Rolex US Patent document posted here (right click and save the .pdf to your desktop).

The bezel on the 116710 is noticeably much thicker than the traditional GMT in order to hold the ceramic insert in place. The bezel is almost as thick as a SeaDweller bezel. Its easy to grasp and rotate. Much has been said on the durability / fragility of the ceramic bezel insert. After a month of use, there are no scratches on the bezel insert nor has there been any chipping/cracking.

There is more insight on the composition of the new composite ceramic bezel inserts in the Rolex US Patent document posted here (right click and save the .pdf to your desktop). 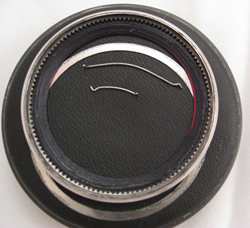 A schematic of bezel inserts, bezel part numbers, and springbar part numbers is posted here (right click and save the .pdf to your desktop).

A Rolex created tutorial on how to use the 24 hour bezel is posted here (PC) and here (Mac).

Along with the GMT redesign came another aspect that is finding its way on all Rolex watches is the use of mirror finishing. The mirror finish "scheme" found on the newer DateJusts, TOG's, and Daytona's have found its way to the GMT. Many Rolex followers have shied- away from considering the new Rolexes because of the mirror finish used on the center-links of the bracelet and on the case. Traditional Rolexes have a brush finish that reflects less light and hides scratches which helped define it as a “tool watch.” Sub's, SeaDwellers, and GMT traditionally hid scratches well because they were designed with specific functions rather than as "jewelry." I too had the same concern of flashiness when considering a 116710 as this was one of the reasons why I flipped the TOG I owned a couple of years ago. The TOG had mirrored center links as well as a larger than normal, fluted white gold bezel. Both the bracelet and the bezel were a little too flashy for my tastes, although I was drawn to it by the red second hand and the updated bracelet clasp.

How it wears & final thoughts

UPDATE: After 19 months, I had the polished center link removed.